I don’t think Rian Johnson wants us to be in any doubt about his approach to the Star Wars universe in The Last Jedi. This is not your father’s Star Wars. Nor should it be – for the same reason that Sherlock and Elementary are not identical to Jeremy Brett’s Sherlock Holmes. Stories exist to be reinvented, to reflect their times, to reach out to new audiences.

There are many excellent articles out there on why it was necessary and right to depart so radically from audience expectations, and how the movie achieves its emotional impact, but I’m going to take a look at it from a screenwriting POV. I think The Last Jedi is an object lesson in how to reinvent an existing franchise – and with more movies and television being drawn from existing material, that’s a skill we’re all going to need.

So what can we learn, as writers pitching to take control of a franchise, from The Last Jedi?

Characters are not interchangeable. Rey is not Luke, and Kylo is not Anakin Skywalker. The characters of the new trilogy may fulfil similar plot functions – gifted hero, tormented villain, hotshot pilot, amusing droid – but plot function is only a starting point, a shorthand to indicate intent to the audience. It’s who the character grows into that matters –

Because who the character grows into shapes the story. If Rey was Luke and Kylo was Anakin, then inevitably they would just rehash the same story again. It’s how they differ and who they choose to be that propels us into a fresh, unpredictable story world, because –

Your job is not to tell the same story again. Which is really all I need to say on that point…

The new outweighs the old.  A lot of fans clearly wanted these movies to be about Luke, Leia, and Han. Of course that’s understandable. Every time we fall in love with a character, we want to know everything about them. But that’s not necessarily an impulse that writers should indulge. There is such a thing as too much information!

Characters play their role in the story and then move on. Dragging them awkwardly back into the limelight and constructing a new crisis for them can actually cheapen their original story.

Instead, the new characters must drive the story, and the old characters provide a canvas against which they make their decisions. Poe must decide whether to be Leia, or lead a different way. Rey thinks she’ll be a hero like the ‘legend’ Luke Skywalker, and Kylo fetishizes Vader’s strength: but they’re both forced to confront their own strengths and weaknesses and grow to understand that they can only ever be a better version of themselves.

The story doesn’t know who the hero is. It’s easy to assume, as a writer, that everyone in your story world accords the central characters the same importance that you so. It’s also fatal to your narrative.

Look at the complaints about Vice-Admiral Holdo not explaining her plan to Poe. “If she’d only told him, everything would have been fine!”  Problem is, that complaint assumes that Poe is the most important character in the scene – that is, it assumes the POV of the audience.

In fact, Holdo’s operating according to the rules of her world. A mere pilot doesn’t have an automatic right to know his senior officers’ plans, especially in a combat situation, and with a tracker on board the ship that suggests possible traitors. She’s acting completely logically – and if we feel cheated, it’s because we’re according Poe an importance he  doesn’t actually have.

(The brilliance of this particular plotline is that it mirrors Poe’s emotional journey. He too thinks he’s the most important person in the room, and has to relearn his place and his role in order to truly lead. Nice piece of writing there…)

There are exceptions, of course. Many people in a Sherlock Holmes universe have heard of the great detective. But no one is going cut Mulder & Scully slack during their investigation just because it would be convenient for the story. Your job as a writer, then, is to find a way to place the characters at the centre of the story, so you can tell it easily, without everyone else assuming their importance…

Most great story universes are funnier, goofier and more child-friendly than you remember them being. All those people whining about Poe keeping General Hux ‘on hold’ to delay him? Did they never see this scene? 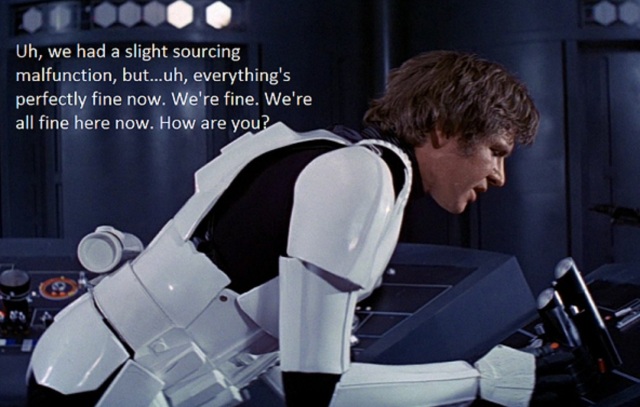 Every story has a range of tones, from the humorous to the serious. Some stories have a wider range, or lean more to one end of the spectrum, but there’s always variation. Without it, the audience becomes numb to the story, exhausted by unbroken seriousness or bored by constant frivolous comedy. Make sure you’re bringing that whole range of tones with you, or you’re not being fair to the story universe.

Know where the heart is, and how to reproduce it. The heart of Star Wars isn’t space battles or dark lords or farm boys becoming heroes. The true heart is simpler and purer than that: love, hope, friendship, quietly doing what’s right even when it’s going to get you killed.

Bring that with you, and you can kill the Big Bad without ceremony, subvert the bad guy’s redemption scene, make the legend a washout and the apprentice already beyond training. As long as the heart is solid, the world remains recognisable. And if you understand the heart, you understand the universe, whatever else you change.

One comment on “The Last Jedi and Reinventing Franchises”